An Overview of Chef

Chef is a powerful automation platform that transforms infrastructure into code. Whether you’re operating in the cloud, on-premises, or in a hybrid environment, Chef automates how infrastructure is configured, deployed, and managed across your network, no matter its size.

This diagram shows how you develop, test, and deploy your Chef code.

The following diagram shows the relationships between the various elements of Chef, including the nodes, the server, and the workstations. These elements work together to provide the chef-client the information and instruction that it needs so that it can do its job. As you are reviewing the rest of this doc, use the icons in the tables to refer back to this image. 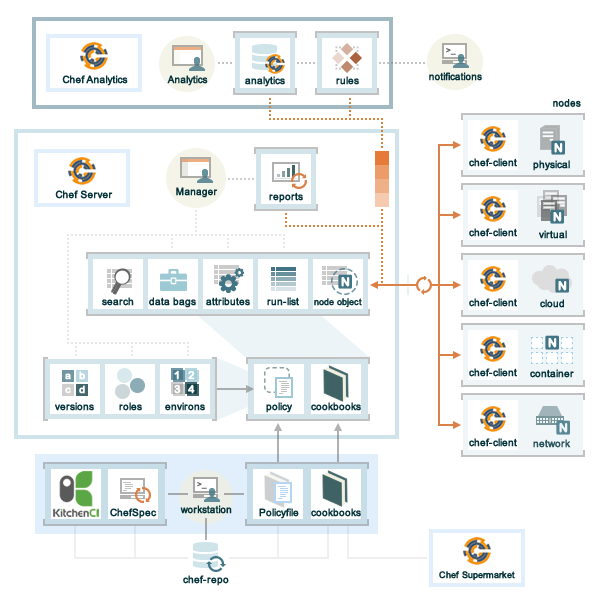 Chef comprises three main elements: a server, one (or more) nodes, and at least one workstation.

The following sections discuss these elements (and their various components) in more detail.

A node is any machine—physical, virtual, cloud, network device, etc.—that is under management by Chef.

The types of nodes that can be managed by Chef include, but are not limited to, the following:

The key components of nodes that are under management by Chef include:

A workstation is a computer that is configured to run various Chef command-line tools that synchronize with a chef-repo, author cookbooks, interact with the Chef server, and interact with nodes.

The workstation is the location from which most users do most of their work, including:

Some important components of workstations include:

System administrators and developers know best about how their infrastructure should be put together. Therefore, the chef-client makes as few decisions on its own as possible. When a decision must be made, the chef-client uses a reasonable default setting that can be easily changed by the system administrators and developers, most often by defining attributes in cookbooks that take precedence over the default attributes present on nodes.

There are three types of servers:

In addition to node objects, policy, and cookbooks, a Chef server includes:

For the chef-client, two important aspects of nodes are groups of attributes and run-lists. An attribute is a specific piece of data about the node, such as a network interface, a file system, the number of clients a service running on a node is capable of accepting, and so on. A run-list is an ordered list of recipes and/or roles that are run in an exact order. The node object consists of the run-list and node attributes, which is a JSON file that is stored on the Chef server. The chef-client gets a copy of the node object from the Chef server during each chef-client run and places an updated copy on the Chef server at the end of each chef-client run.

Some important node objects include:

Policy maps business and operational requirements, process, and workflow to settings and objects stored on the Chef server:

A cookbook is the fundamental unit of configuration and policy distribution. A cookbook defines a scenario and contains everything that is required to support that scenario:

The chef-client uses Ruby as its reference language for creating cookbooks and defining recipes, with an extended DSL for specific resources. A reasonable set of resources are available to the chef-client, enough to support many of the most common infrastructure automation scenarios; however, this DSL can also be extended when additional resources and capabilities are required.

Cookbooks are comprised of the following components:

Chef is a thin DSL (domain-specific language) built on top of Ruby. This approach allows Chef to provide just enough abstraction to make reasoning about your infrastructure easy. Chef includes a built-in taxonomy of all the basic resources one might configure on a system, plus a defined mechanism to extend that taxonomy using the full power of the Ruby language. Ruby was chosen because it provides the flexibility to use both the simple built-in taxonomy, as well as being able to handle any customization path your organization requires.

© Chef Software, Inc.
Licensed under the Creative Commons Attribution 3.0 Unported License.
The Chef™ Mark and Chef Logo are either registered trademarks/service marks or trademarks/servicemarks of Chef, in the United States and other countries and are used with Chef Inc's permission.
We are not affiliated with, endorsed or sponsored by Chef Inc.
https://docs-archive.chef.io/release/11-18/chef_overview.html